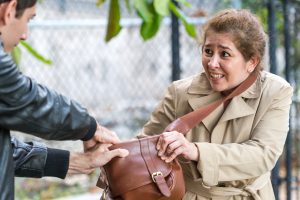 These are just a few of the purse-snatching incidents we have identified. There are many more to be uploaded, so please check back.

In 2016, the most recent year for which ChurchCrime.info has data, police reported 55 purse-snatchings through the NIBRS data collection system. NIBRS stands for National Incident-based Reporting System and is the modernization of the Uniform Crime Report. NIBRS data only represents 20% of US crimes because most jurisdictions still have not upgraded to NIBRS. A rough estimate of the number of purse-snatchings at churches, if NIBRS were representative, would be 275 for the year 2016 in the United States.

Purse-snatchings occur in different scenarios. Some are the archetypal robbery: yanking the bag from the arm of an unsuspecting female. Others are simple larcenies (or thefts) where the suspect picks up an unattended purse off a table or church pew. None-the-less for our purposes, all are considered colloquially as purse-snatchings. It is likely that NIBRS registers many purse snatchings simply as thefts because the purse was not actually ripped from the arm of the victim and there is no way of determining what percentage of simple thefts (also called larcenies) were of purses. However, keep in mind that  only half of all crime is ever reported to police, and perhaps less often by church members due to social stigma.

Most entries on these pages only contain arrests, charges, or indictments, which may eventually be reduced, dropped, or expunged, and as such, these actors may in fact be innocent in a court of law. These are just a few of the purse-snatching we have identified.

2018 – Pilgrim Lutheran Church, Houston, TX. Reagan DeKeyzer left her purse in the parking lot of the church as she dropped off her child for daycare. Two offenders drove alongside her SUV, smashed the window, and grabbed her purse. Purse snatching caught on camera outside SW Houston church.

2018 – St. Peter’s Church, Danbury, CT. Elderly woman was attacked outside the church and her purse was taken. Police Ask Public’s Help In Search For Suspect Who Snatched Purse From Elderly Woman In Danbury.

2018 – St. Joan of Arc Church, Bronx, NY. Hortencia Rodriguez (92) was beaten up and robbed of her purse and keys. 92-Year-Old Woman Beaten, Robbed of Her Purse Steps From NYC Church.

2018 – First Christian Church, Kokomo, IN. Merry Ricketts purse was stolen at a church during a Girl Scout meeting. Thief steals woman’s purse from inside church.

2018 – Our Lady Queen of Heaven Roman Catholic Church, North Lauderdale, FL. Unidentified elderly female was praying when a man approached from behind and lifted and walked off with the purse. Woman’s purse stolen while she prays in church.

2018 – Heyward AME Church, Heyward, NC. While at church someone broke into her vehicle and stole unidentified female’s purse. Woman at church when purse stolen.

2018 – Destiny Christian Church, Del City, OK. Kylie Bowdler set her purse down in the front row of church to save her seat. Someone took her purse and used her keys to also steal her Jeep Renegade from directly in front of the church. Del City woman’s purse, Jeep stolen at church.

2018 – Memorial Lutheran Church, East Nashville, TN. Unidentified female had her purse stolen from under her chair. A new “visitor” who had sat behind her was later arrested. Woman Arrested for Stealing Purses from East Nashville Church.

2018 – Pleasant Valley Church of Christ, Little Rock, AR. Woman was dropping her son off at church school. When she came out, her car window was smashed and her purse gone. Woman’s Purse Stolen While Dropping Off Son at School in West Little Rock.

2017 – First Lutheran Church, Poulsbo, WA. Two victims had purses stolen from church during a service. The day following, one victim’s car (whose keys were presumably in the purse) was also stolen from the an elementary school lot. A female was arrested as a result of CCTV security footage. Woman charged after purse stolen from Poulsbo church during Sunday services.

2017 – Chapel of Divine Love, Philadelphia, PA. An elderly woman (83) was attacked for her purse. It appears she was followed out of the church when the attack took place. Police: Elderly woman attacked and robbed outside of church.

2017 – Church of Saint Joseph, Bronxville, NY. Woman (65) had her purse stolen from one of the pews at the church. Cops: Man swiped purse from Bronxville church-goer.

2017 – Embassy Christ Church, Gary, IN. Woman was assaulted in attempted purse snatching at a church. During the attack everything fell from the purse, thus stopping the attack. Police investigate attempted robbery at Gary church.

2017 – Immaculate Heart of Mary Church, Scarsdale, NY. Wallet stolen from a purse of unidentified female at church to drop some flowers off, where she left it unattended in a pew. Man Charged with Assaulting his Girlfriend, Wallet Stolen at IHM Church.

2017 – Heaven Sent Community Baptist Church, Raytown, MO. Female was robbed of her purse and other items at gunpoint in the parking lot of the church. Woman says robber held her at gunpoint in Raytown church parking lot, taking purse, phone and car.

2017 – Cordova Presbyterian Church, Memphis, TN. Unidentified woman had purse stolen out of her car parked at church, losing $250 in value. But checks were also forged in excess of $1,300. Accused car burglar is ‘easily influenced’.

2017 – All Saints Catholic Church, El Paso, TX. Unidentified woman was attacked as she exited the church. Her purse was taken as she fell to the ground. As suspect was arrested. Man arrested after allegedly robbing elderly woman outside a church.

2016 – All Saints Catholic Church, Des Moines, IA. A female’s purse was stolen during Mass as parishioners stood in line for communion. Woman’s purse stolen during communion in Des Moines church.

2016 – St. Luke’s Parish Church, Darien, CT. Unidentified female had her purse stolen after leaving it on a table for a few minutes unattended. Her total loss was over $1,000. Ungodly Theft: Purse Stolen at Church Event, Credit Cards Used.

2016 – Queen of Heaven Church, Green, OH. Elderly woman (79) had her purse stolen as she walked up for communion, having left her purse in the pew. Thieves steal woman’s purse during Communion at church.

2016 – Divine Mercy Parish, Vineland, NJ.  Woman had left car unlocked as she went to services inside the church. Purse and passport were stolen. Purse reported stolen from church parking lot.

2016 – St. Paul Episcopal Church, Richmond, Elderly woman (95) was robbed of her purse outside of the church. She was injured from falling, pushed by man on drugs. Man gets 9 years for snatching 95-year-old’s purse, says drugs made him ‘a monster’.

2015 – Hebron Baptist Church, Hebron, OH. Unidentified female’s purse was stolen by woman claiming she was escaping abusive husband along with her children. “When they went looking for food and money, she stole the purse. Woman arrested for church purse thefts.

2015 – St. Jude Catholic Church, Fort Wayne, IN. Woman working for a funeral home had purse was stolen after she left it for a short time at a church. Contents of purse stolen from inside church.