Most entries on these pages only contain arrests, charges, or indictments, which may eventually be reduced, dropped, or expunged, and as such, these actors may in fact be innocent in a court of law. These are just a few of the drug incidents we have identified. There are many more to be uploaded, so please check back. 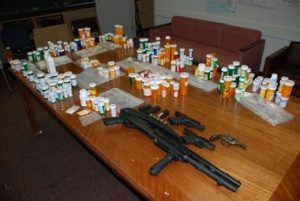 Drugs are a major problem at U.S. churches. According to the National Incident-based Reporting System [NIBRS] (revamp of the Uniform Crime Reports) in 2016 (the most recent year for which data is available) 1,103 instances of drug possession, use, or distribution occurred at churches. Because NIBRS is only in use so far in 20% of the U.S., we must approximate actual counts. This provides us with the final estimate that 5,515 incidents were reported to have occurred. It is likely that many instances were never reported.